Tokyo, September 24, 2020 - Rakuten, Inc. today announced that the total cumulative number of points issued through its Rakuten Points loyalty program has exceeded two trillion (one point is worth one yen.)*1

In addition to Rakuten-provided services, Rakuten Points can also be earned and used for payment when shopping at partner stores across Japan or when shopping online. Launched in 2002 as Rakuten Ichiba’s in-service point program, the popular Rakuten Points service later evolved into points that could be earned or used on other Rakuten Group and partner services. In 2014 Rakuten began distributing Rakuten Point Cards, a shared point service usable in brick-and-mortar stores partnered with the Rakuten Group. The number of locations where Rakuten Point Cards can be used has since expanded, and the company has endeavored to further improve the level of convenience Rakuten Points provide. 15 years after the launch of Rakuten Points, the total number of issued points exceeded one trillion in 2017. That number has since doubled, exceeding two trillion points in only three years. 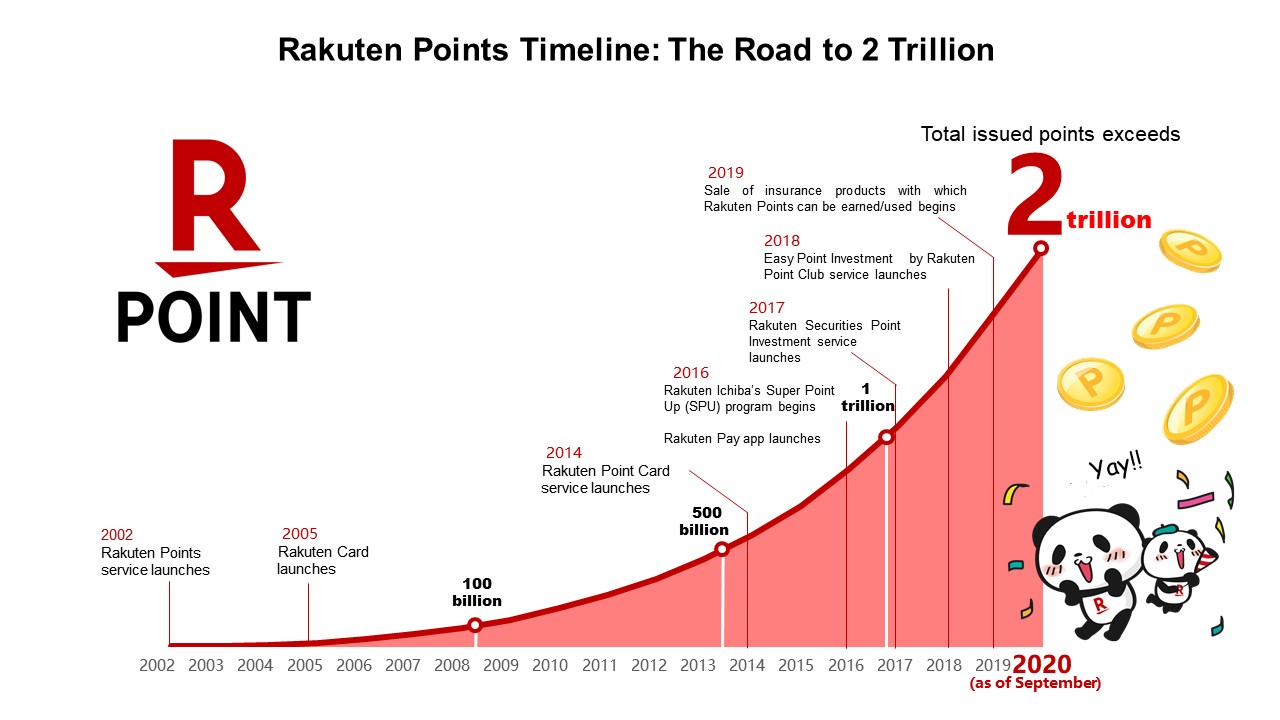 Recently, the Japanese government has launched the Project for Encouraging Businesses to Introduce Cashless Payment Systems and Pass on Benefits to Consumers as well as the My Number Point Project, and consumer awareness of point benefits is on the rise. Rakuten has implemented a number of point initiatives ahead of the industry curve, contributing to a notable increase in the number of Rakuten Card cardholders, cashless payment services such as Rakuten Pay app and Rakuten Edy, and partner companies adopting Rakuten’s shared point service through Rakuten Point Card. The number of locations where Rakuten Points can be earned is steadily expanding, both in brick-and-mortar stores and online, and in 2019, when the use of cashless payment services rapidly increased due to favorable conditions driven by government initiatives, Rakuten reached an annual distribution total of more than 320 billion points*2.

By creating an ecosystem based on Rakuten Points and by providing users with point-based benefits instead of spending more money on advertising costs, cross-service accessibility within Rakuten Group services increased and the cross-use percentage for multiple Rakuten service usage rose to 72.3% (June 2020)*3, an increase of 7.4 percentage points from 64.9% three years ago (June 2017). Furthermore, programs such as the Super Point Up program, which scales the amount of points earned on Rakuten Ichiba based on Rakuten Group service usage, as well as the point present program which awards users 1,000 points each time they use a new Group service, have led to an increase in users across the Rakuten Group’s services.

In recent years, the Easy Point Investment by Rakuten Point Club service, which allows users to utilize their points, has also gained popularity as a new way of enjoying earned points, attracting more than two million users*4. Rakuten Securities launched its Point Investment service, which allows customers to use points to purchase investment trusts (regular and savings) and domestic stocks, and around 70%*5 of those investment trust purchasers are also using Point Investment*6. Customers can also now use points to pay insurance premiums for applicable insurance products provided by Rakuten General Insurance*7, further expanding the possibilities for point usage. These measures have proved popular with users, and Rakuten Points have been consecutively named the number 1 loyalty points program in Japan by overall customer satisfaction*8.


Rakuten aims to provide increased convenience and a more enjoyable consumer experience that passes on savings to customers, as well as innovative new value through Rakuten Points.

*1 Exceeded on September 13, 2020. Equivalent to approx. 18.8 billion USD on same day.
*2 Actual results from 2019.
*3 The number of users who used 2+ services over the previous 12 months divided by the number of users who used all services over the previous 12 months (as of June 2020). Limited to the use of services where users can earn Rakuten points.
*4 As of July 2020.
*5 Customers who selected normal orders when purchasing investment trusts on Rakuten Securities in June 2020. Data provided by Rakuten Securities.
*6 Only regular points can used with Easy Point Investment by Rakuten Point Club and Point Investment.
*7 Regular points and limited time points can both be used.
*8 Source: “Survey on Points Systems.” Valid responses: 1,000. Online survey conducted by MyVoice Communications, Inc. in July 2020.