- This will be the first official documentary about Andrés Iniesta, featuring unpublished content about the Vissel Kobe player.
- The new film shares an intimate look at the life of world-renowned footballer Andrés Iniesta and includes exclusive interviews with globally renowned football stars Messi, Neymar, Suárez, Guardiola, Xavi and more.
- The official trailer for the documentary available here: https://youtu.be/C0NbseZNOpI

Barcelona and Tokyo, February 12, 2020 – Rakuten, Inc. and Rakuten TV today announced plans for an upcoming new original production entitled Andrés Iniesta – The unexpected hero, the first-ever documentary about the football legend Andrés Iniesta. The documentary will feature unpublished content reflecting on the major milestones in his career and personal life. 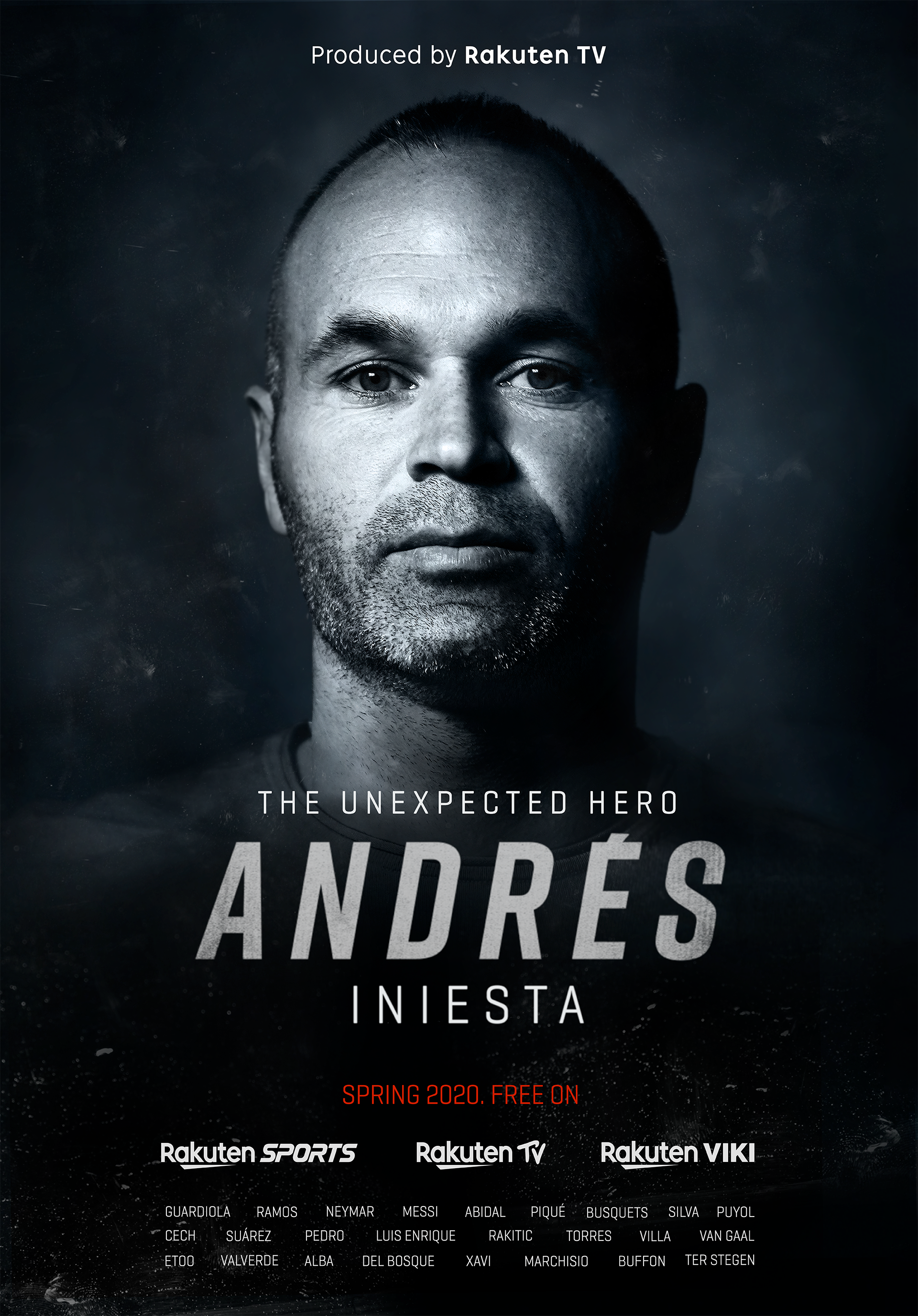 Andrés Iniesta – The unexpected hero will be released globally, starting with Europe, Japan, the United States and Southeast Asia. In Europe, the documentary will be exclusively available for free on the AVOD (ad-supported) section of Rakuten TV, one of the leading video-on-demand platforms in the European market. In Japan, the documentary will be available on Rakuten TV and Rakuten Sports, the Rakuten Group’s global live streaming, video on demand and community platform that powers live sports matches from top leagues and includes the original series Iniesta TV, and in the U.S. and Southeast Asia on Rakuten Sports and Rakuten Viki, the Rakuten Group’s global video streaming service providing content translated by a volunteer community of fans. Global distribution will follow via Rakuten content partners.

The documentary focuses on Iniesta’s life and incredible career, spanning the beginning of his path at Barcelona Youth Academy, La Masía, through to his meteoric rise to fame playing for FC Barcelona and Spain, where his on-pitch skills secured the victory at the 2010 World Cup, and his arrival at Vissel Kobe in Japan. Alongside testimonials directly from Iniesta, the documentary brings together tributes from globally renowned football players such as Lionel Messi, Neymar, Luis Suárez, Pep Guardiola and Xavier Hernández.

Iniesta commented, “My story is the story of a person who tries to overcome any obstacle to be the best version of himself. It is a story about difficulties from an optimistic perspective and I hope people find inspiration in it.”

Rakuten TV will produce Iniesta in collaboration with leading Spanish production company Producciones del Barrio, which is led by Jordi Évole and Ramón Lara. The documentary is scripted by journalist Marcos López, who has closely followed Iniesta’s career, authoring the player’s official biography, The Artist: Being Iniesta. The original idea was created by Sports&Life agency, which represents Iniesta.

Speaking about the new documentary, Jacinto Roca, CEO and founder of Rakuten TV, commented, “Rakuten values empowerment, innovation and optimism which are perfectly illustrated in Iniesta’s personal and professional life. This story talks about personal self-improvement, starting from his beginnings in his small hometown, Fuentealbilla, up until becoming the captain of FC Barcelona. It is also about global innovation in the sport, thanks to his unique playing style. The documentary flows together to create an amazing story that we are proud to be part of, and we are excited to share within an innovative distribution system.”

Rakuten TV
Rakuten TV is one of the leading Video On-Demand platforms in Europe. It offers a TVOD service (Transactional VOD) providing viewers a true cinematic experience with the latest new releases in the best audiovisual quality. It also includes an AVOD (Advertising VOD) section, Rakuten TV Free, in a blend of thematic channels embracing Hollywood classics, local, exclusive and themed content, all for free.

Rakuten TV is available in 42 countries and forms part of Rakuten, Inc., one of the world’s leading internet services companies, offering a wide variety of services for consumers and businesses, with a focus on e-commerce, fintech and digital content. Rakuten, headquartered in Japan, is also known for its partnerships with FC Barcelona, the NBA, the Golden State Warriors, Davis Cup and Spartan Race.