Rakuten EXPRESS currently provides delivery services for goods from Rakuten Direct, Inc., a Rakuten Group e-commerce service offering daily necessities, Rakuten Books, and some of the deliveries handled by the Rakuten Super Logistics service, which provides logistics for merchants on the Rakuten Ichiba marketplace. In addition to Tokyo’s 23 wards and the cities of Ichikawa, Funabashi, Urayasu, and Matsudo in Chiba Prefecture, the service now covers 14 cities in metropolitan Tokyo—with plans for further expansion in the future.

The expansion of Rakuten EXPRESS is part of Rakuten’s “One Delivery” vision for a comprehensive delivery service providing everything from storage to delivery for merchants on Rakuten Ichiba.

*1 Through the expansion of the service, Rakuten EXPRESS now covers approximately 10% of the population of Japan.

About Rakuten EXPRESS
Rakuten EXPRESS is the delivery service operated by Rakuten. In addition to products from Rakuten Direct and Rakuten Books, the service also delivers some of the products from merchants on Rakuten Ichiba handled by Rakuten Super Logistics. The service coverage area is comprised of the 23 wards of Tokyo, 14 cities in metropolitan Tokyo, and four cities in Chiba Prefecture. In order to reduce the incidence of redeliveries to absent customers, Rakuten EXPRESS allows customers to specify a time for delivery up to midnight and offers the “Oki-hai” unattended delivery service option which allows customers to set a location on their property for products to be delivered to in the event of their absence.

Expansion of the service area to 14 cities of metropolitan Tokyo 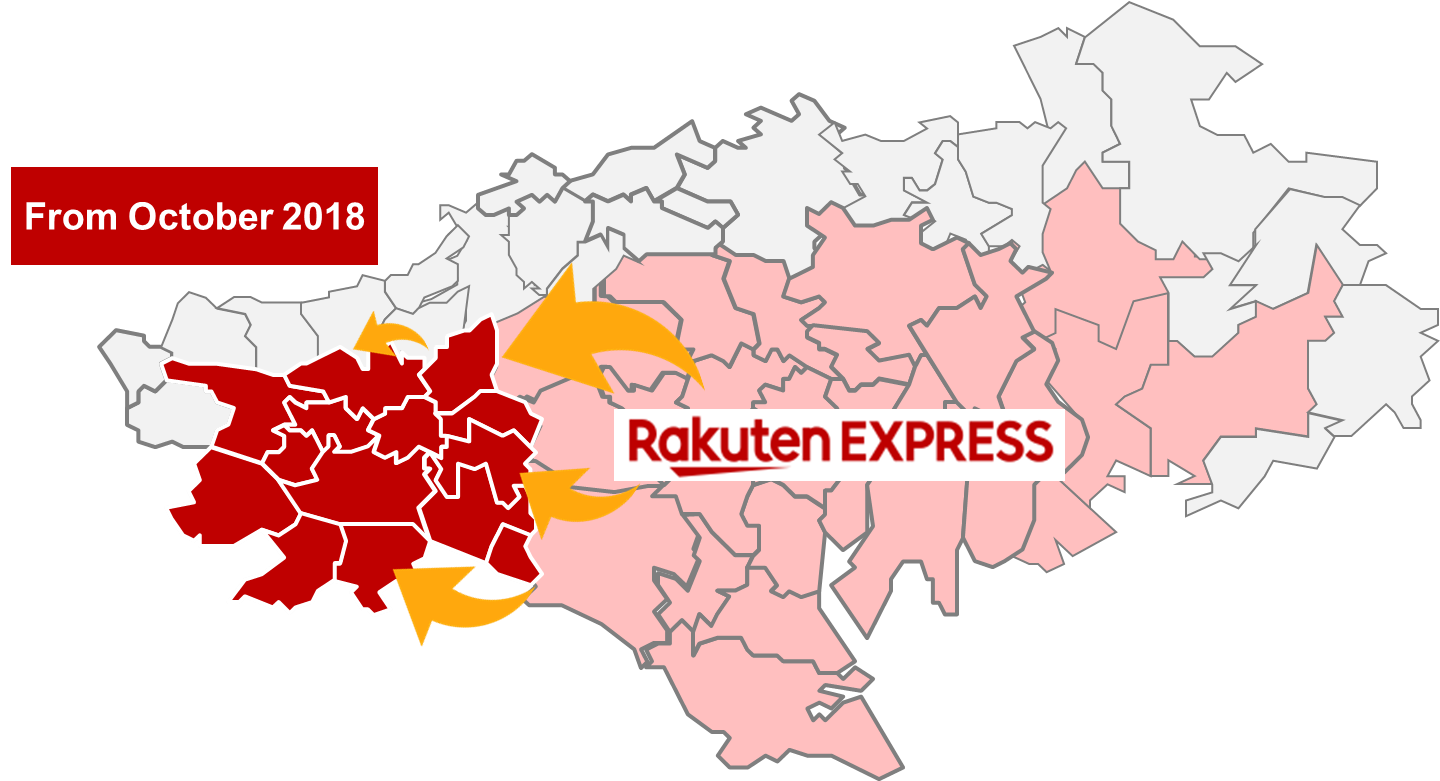 Rakuten Super Logistics
Rakuten Super Logistics offers comprehensive distribution services from storage to shipment for products from merchants on the Rakuten Ichiba marketplace. It provides a high-quality logistics service covering everything from the arrival of goods at the warehouse to delivery, and offers services that meet the unique requirements of each merchant, such as gift-wrapping or the attachment of promotional materials. By outsourcing their delivery work to Rakuten Super Logistics, merchants are free to focus on tasks such as product planning and marketing.

The “One Delivery Vision”
In recent years, the increasing number of redeliveries, staff shortages and other issues faced by the domestic logistics industry are becoming broader issues for society at large, and merchants are finding it increasingly difficult to ensure stable operations. In order to address these issues, Rakuten has established its “One Delivery” vision for a comprehensive logistics service for merchants on the Rakuten Ichiba marketplace, in which the company is undertaking a range of initiatives.