The Rakuten brand represents optimism and empowers our members to experience the joy of discovery with a sense of confidence and excitement.

Growing together with our global communities, we support individuals, businesses and societies to realize their dreams. This idea is at the heart of each and every one of Rakuten’s services.

Rakuten’s many services reflect the principles of our brand.

These are some of the people and stories behind them.

Rakuten aims to offer amazing choices and endless opportunities
that fulfill the lives of every one of our users, leading to a happier society for all.

Helping a new family enjoy a more comfortable and happier everyday life, with a secure future for their children.

Helping a student living on their own create everyday memories to cherish with friends and family.

Supporting a young adult pursuing his dreams with convenient services that give a little back - everyday.

Rakuten is committed to working together with our partners to reach new heights.
Together, we can open up new possibilities that tackle society’s biggest challenges.

In Japan, as in many countries around the world, supermarkets have long served as trusted and crucial components of the local communities they serve. But in recent years Japan has seen a wave of supermarket closures, particularly in rural areas. One major factor appears to be the introduction of proprietary e-money loyalty programs at major supermarket chains as they compete to win customers.

Rakuten took a different stance, instead opting to deploy its Rakuten Edy e-money service in support of local supermarkets and retail stores. Merchants would be able to utilize Rakuten Edy’s point system as it if were their own, without the need to alter their branding.

The idea behind the offering was that if local supermarkets and retailers were to adopt Rakuten Edy for payment and loyalty programs, they could compete with the major chain stores. This theory proved to be sound: Business at local supermarkets began to recover, while some even enjoyed significant growth. “Rakuten Pay,” another service that enables small-scale merchants to offer customers a diverse range of payment options, is looking to achieve a similar result.

“For me, the definition of meaningful work has changed since I was a kid,” says one member of Rakuten Edy’s project team. “Now I feel like a job is defined by how ambitious it is. How much can you improve the lives of people in the community and around the world? That’s what’s important. Today, I want to make the world a better place than it was yesterday, and tomorrow, I want to do it again. This is how Rakuten influences the lives of so many people. This is what I think it means to work.”

Working to provide solutions to
logistics issues with “Rakuten Drone”

Rakuten began offering its first drone service in May 2016, with “Rakuten Drone” (formerly “Sora Raku”). Launched as a trial on a golf course in Chiba, Japan, the service allowed golfers to order snacks, drinks and other items through a dedicated app on their smartphones and have them delivered directly to them on a green via drone. This was Japan’s first consumer-facing drone delivery service.

The drone, known as “Tenku,” was specially designed for the service. Jointly developed by Rakuten and Autonomous Control Systems Laboratory (ACSL), the system allows for completely autonomous flight, and simple, safe operation through the “Drone Dashboard” on a dedicated mobile device.

Following their success on the golf course, the “Rakuten Drone” team has turned its attention to real-life logistical applications. They demonstrated the drone’s capabilities by making deliveries to islands on which people have limited access to shops, as well as through test deliveries utilizing mobile LTE networks. The team is also carrying out a trial delivery service that combines mobile sales vehicles and product deliveries by drones.

The more advanced drone technology and services become, the more comfortable and convenient our world can be. Drones could deliver medicine to people living on remote islands that lack pharmacies or hospitals, they could assist the elderly with everyday shopping, they could even distribute aid in times of disaster. Rakuten believes that drones have the capacity to fundamentally change the way we live in the future for the better.

Rakuten Farm provides a regular delivery service and direct sale, through Rakuten Ichiba, of 100% organic produce, and conducts the sale and provision of fresh vegetables, cut salads and frozen vegetables to restaurants and other establishments.

In order to carry out organic farming, farmlands need Organic JAS certification, but this requires using soil which hasn’t been treated with agricultural chemicals for a minimum of two years. With this in mind, we decided to focus on farmland that was left abandoned. The amount of abandoned farmland in Japan is increasing each year, but these fields are actually suited for organic agriculture. By cultivating the soil, it becomes possible to work towards acquiring certification without having to wait for two years to fulfill the requirement.

Making use of abandoned farmland, which has become an idle asset, and expanding organic agriculture also leads to job creation and stimulates the local economy in that region. It also makes stabilizing the income of agricultural workers possible and enables farmers to pass on agriculture techniques to the next generation, which has become more difficult in recent years due to the lack of farmers in the younger generations. By using Rakuten Farm, users can support Japanese agriculture and bring healthy, delicious organic produce to the dinner table.

By providing beneficial services to farmers, users and Rakuten, and spreading organic agriculture and organic produce, which is still in the early stages of growth in Japan, we will continue working to solve the issues faced by Japanese farmers and revitalize Japan’s agricultural industry.

Today, “Yona Yona Ale” is regarded as one of the leaders of Japan’s craft beer world but for manufacturer YO-HO Brewing, it wasn’t always smooth sailing. Launched in 1997, “Yona Yona Ale” initially found success riding Japan’s first craft beer boom. But as the boom came to an end, the company found itself on the verge of bankruptcy. Stores were no longer stocking the brand, and just one retail contract remained: Rakuten Ichiba.

YO-HO BREWING COMPANY CEO Naoyuki Ide was at the end of his tether. One day, while tidying his office, he came across a handwritten letter: “Thank you for opening a store on our platform. Let’s take on the world together using the power of the internet. (Signed Hiroshi Mikitani, Rakuten)” – it was dated 1997, the year both brands were founded. The letter inspired Mr.Ide to give the internet another go, to believe in the possibilities of online shopping and put his all into Rakuten Ichiba once more.

Mr.Ide took full advantage of Rakuten Ichiba’s e-commerce consultants, experimenting with different methods and planning a steady stream of original campaigns through the platform’s freely customizable store pages. Customers came in droves as the merchant created more and more entertaining content. “Yona Yona Ale” had succeeded in differentiating itself from the major breweries, bringing about steady sales growth and inspiring the brand's recovery.

Here we explain the brand that Rakuten strives to be, and how we have evolved so far.

The brand that Rakuten aspires to be

Navigating Rakuten’s wide range of services is like exploring a new city: There are new discoveries waiting around every corner. Through the Rakuten Ecosystem, with our universal membership I.D. and point program at its core, we have always focused on empowering users to experience the joy of discovery, as well as convenience and value.

As a brand, we aspire to achieve such a high level of trust from our users that they are able to use any Rakuten service with a sense of confidence and excitement.

The story behind the brand

In 1997, our first brand was born, in the form of the online shopping mall Rakuten Ichiba. The name was inspired by a desire to create something akin to the Rakuichi-Rakuza, Japan’s first free and open marketplaces from the Azuchi-Momoyama period (1573-1600), while emphasizing a belief in the future and a sense of “optimism” - as the word rakuten means in Japanese. These ideas have remained an important part of every service we have developed since. 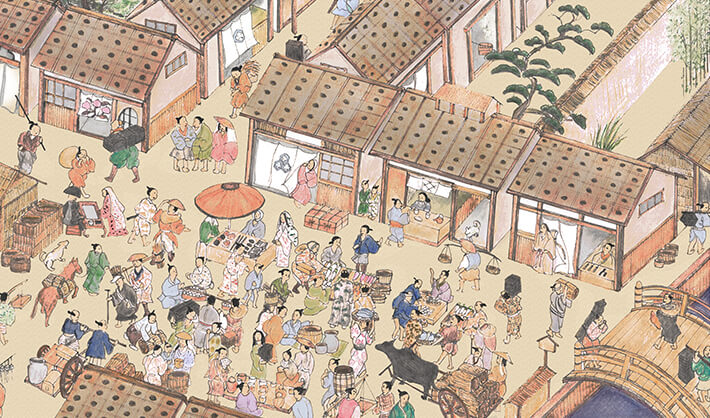 It was the dawn of the internet age, and for many, online shopping was an exotic idea. By choosing a familiar Japanese-sounding name, Rakuten looked to earn the trust of its new customers. Soon after, the company name was changed from the original “MDM” to “Rakuten.” Other group services followed suit, working the new name and logo into their own brands.

The road to brand unification

With Rakuten’s expansion outside of Japan, we needed to revisit the communication of the brand name and logo. By expressing the brand in Roman characters, we kept the “Rakuten” name and stayed true to the roots of the brand and the group.

In our 20th year, we took the step of unifying our brands. After rethinking the logos and names of each group service - both domestic and international - the new brand logo became the central pillar of our unified brand.

Global partnerships for a global brand

The unification of Rakuten’s brands commenced on July 1, 2017, at the same time as we launched our partnership with internationally beloved Spanish soccer team FC Barcelona. In September of the same year, we entered a partnership with star-studded NBA team the Golden State Warriors.

Both teams sport the Rakuten logo prominently on their uniforms, helping to communicate our brand to fans around the world.

Existing expectations are often the reason for giving up or compromising, without thinking too deeply. At the Rakuten Group, we are determined to redefine those expectations.

By believing in the future and with the optimistic spirit that our name represents, we are committed to providing a new vision of a bright future ahead and happiness for our members, partners, communities and people all over the world.

Our vision is represented in our new global logo, unveiled in 2018, by a motif based on the Japanese character for "one", or “ichi”, representing both a new beginning and our ambition to lead in whatever field we choose to operate in.

Unique, yet unified:
How four fonts express the unity and diversity of the Rakuten brand

As a global innovation leader offering more than 70 different services, Rakuten communicates a wide range of messages with users and society. Led by the Rakuten Design Lab under the direction of Rakuten Chief Creative Director Kashiwa Sato, we developed our new font family to express the uniqueness and diversity of the Rakuten Group and our various services and offerings, while maintaining a sense of consistency with our existing brand assets.

Released in 2020, this diverse range of options allows us to select the fonts best suited to our message, opening avenues for more effective communication.

Ukraine Warms up with Generous Aid from Mickey