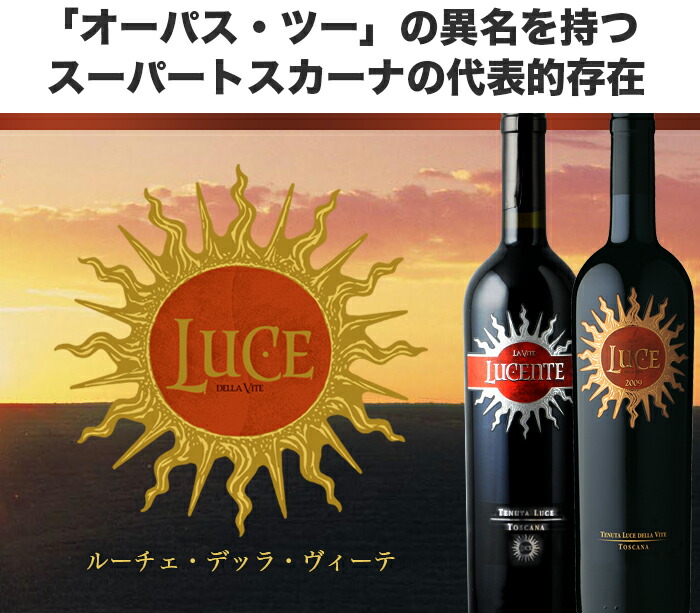 Luce デッラ ヴィーテ is a winery founded by two wine brewers representing passion to wine called Vittorio Frescobaldi and Robert Mondavi and the 20th century with the technique of the prominent vinification in 1995.

A corona having 12 flame surrounding sun and it which shine on a label.
The people visiting the central city of Italy will be to see that the crest of the sun is ticked away by a pillar and the door of the historic building including the altar of the サント スピリート church of Florence built on the land where the Frescobaldis made oblation.

Field of モンタルチーノ which produces the noblest wine in Italy

The village of モンタルチーノ located on the beautiful hill country of 654 meters above see level still keeps attractive looks from the Middle Ages. The slope of this hill country is covered in a vineyard and the bush of the olive producing grand wine, and part belongs to art, nature, the culture park of Val d'Orcia. There are many Holm oaks in these neighboring forests, and it is said that the Latin name is the origin of the name of モンタルチーノ.

There is Luce デッラ ヴィーテ in the viticulture area in the southwest of モンタルチーノ, and a grape is put on plottage 55 of 192 hectares.

A part of the field is planted in 1977, and others were planted in 1997, and, in 植密度, it is 6,100 per 1 hectare. Altitude is 350-420 meters and is one of the places most of high altitudes in モンタルチーノ.
The soil where there is little nourishment that there are many sabulosity including the crystalline rock called the Gareth fatty tuna and soil which I mixed of the limestone at the upper part of the field, and the drainage is good is ideal for the cultivation of the サンジョヴェーゼ kind. 畑の下部では粘土質が多く、メルロー品種に適した土壌となっています。

この地方の特徴である、太陽がさんさんと降り注ぐ長い夏と、ルーチェの南向きの畑は、ブドウがゆっくりと完熟することを可能にするとともに、ブドウに驚くほどの凝縮度と力強さを与えます。 Complicated taste of the aroma of the grape is maintained by night because wind blows, and temperature falls.

About cultivation and the brewing of Luce

The grape is sorted solemnly by hand, and the unsuitable grain is on the way, and the quality such as things lacking hurt thing and maturity is removed.
It crushes a grape and removes a flower stalk, and モスト is moved in the stainless steel tank with the temperature management capability, and fermentation and Mase Rashi on are performed with a rind of a fruit for the next four weeks.

Meanwhile, various ways are exerted to draw a flavor of the fruit and indulgently mature Tannin to the maximum.
The マロラクティック fermentation to change sharp malic acid into smooth lactic acid more softly begins during this period and is finished in バリック barrel from France. In the place where fermentation and Mase Rashi on were over, サンジョベーゼ and the merlot are unified by one in order to produce "LUCE".

A brewer changes the ratio and, depending on a year, mixes these two and, with the same amount, usually expresses characters of this wine. The wine is refined with バリック barrel from France for 24 months.
Meanwhile, I repeat one, and one バリック barrel is checked, and only the thing which the evolution that I excelled in in particular from that is seen in will be finally chosen as Luce.

The wine will leave the hand of the winery in a bottle afterwards after a maturational period of more than one year.
By one is wrapped under the scrupulous attention by hand and is gained to a wooden box.
Part is stored as a part of historical collection in a winery.

It is this "Luce" to have adopted the cepage of a サンジョヴェーゼ class and the merlot class for the first time in a place of モンタルチーノ.
When the softness of the merlot class was mellow, as for joining the reliable body elegance of the サンジョヴェーゼ class together, there was not the person who formed it while being like the quite proper idea. It is this wine that it may be said with one innovative "work" which I realized only after it depends on the collaboration of Marchesi de' Frescobaldi (マルケーゼ D Frescobaldi) house and the Robert Mondavi (Robert Mondavi) house in the ground of Brunello di Montalcino (bulldog Nello D モンタルチーノ) where the quality value of the サンジョベーゼ class was accepted globally exclusively.

From 2002, Lamberto Frescobaldi (Lambert Frescobaldi) where all responsibility was entrusted to continues ticking away the history of "Luce" which accomplished the fusion of the merlot class introduced into tradition kind and モンタルチーノ of the サンジョヴェーゼ class coming from this ground in 1976.

From ... winery HP ...
It will be this 2009 that the quality of the grape in the crop can be called the very good age generally.
The change of the climate produced favorable conditions, and the grape in the crop was carried to perception Teena while becoming ripe well with maintaining good acid of the balance and the aroma with the complexity.

Luce2009 having the ruby which condensed. Fascinating aroma to show the expanse of the deep layer increases a fragrance of the spice such as the green pepper or nutmeg and Glycyrrhiza and the star anise following a blueberry, a cherry, the fruit of the prune. It is snuggled up to the refreshing fragrance of a mint and the fresh almond and is completed with sweet milk chocolate and the fragrance of the Lebanese cedar finally. The taste is round and feels the strength of the mineral, and deep, smooth Tannin is supported by solid alcohol. It is the taste that the lingering sound which I got of the harmony is left for a long time.

Lucente is the second wine of Luce.
Another selection which I chose a grape as among a field same as Luce being conscious of cooking the wine which was "contemporary".
Unique terrorism Waal is expressed to this wine.
バリック lets you mature in a winery of モンタルチーノ for 12 months, and the bottle filling is just carried out in a site, too.

It is great vintage 1997 almost the history mark that it was received this time!
It is charm, this ルチェンテ which can taste the benefit of the great vintage at a reasonable price, the one which you should right purchase now of Luce!

※Because this product shares stock with a true store, approve it beforehand as there is rarely the case of the sellout even if I have you order it.