Seven of the rumor ★ hotels, even those "Burj al Arab"
Actual ants had been employed by the glass!

From this experience, making "alchemywayns",
Now, from a variety of starred restaurants in the world for wine by the glass
One is I want to make a request.

Speaking of all Spain, bullfighting, flamenco, soccer, first image. It is a wine label do Spain people passionate about culture, the Bull (Toro).

It is not exaggeration said as a living symbol that bullfighting for Spain.

Matador (Matador) over life and death in the Bullring to pick that last"Moment of truth"Is referred to as either very concentrated moment in all of Spain? Further imagine the passion for bullfighting that Spain-who we really are.

Wines of Spain is broad-minded wrap to friends and family without hesitation, choose the situations, such as while watching movies alone,It is truly representative of all my tea wine.

And in recent years in Japan popular! The Barber m.
Pintxos on the standard menu bar (slider), tapas (small dishes) and chemistry from very casual and modern image of the tavern you decided from the menuCoordinates the broad rangeYou will be able.

In Japan many people want to introduce wine Spain!
I traveled to Spain finally found from various wineries during is arrived J.
Local favorite and internationally popular wineries,Taste the excellent cost-performance even deeper wine somewhere friendly atmosphere.
Discrimination for local residents when it visited the local foreigners in our warm touches me, "come on anytime! "And first reason better than" try to drink! "And has appealed to the hand the bottles away.

A symbol of fertility, and also label black bull to the image of Spain's Bull (Toro) with the motif represents the magnificence of Spain is a vast land in the novel, endless red.
In the world now recognized that La ManchaThe attraction is an impressive design that represents the movement of the Earth.

To make this wine company "alchemywayns" is the longest ties with France Bordeaux in wine consumption of many countries around the world, is the capital of the United Kingdom have put the most power to wine education.
In particular brewing technology relies on the old fashioned way but many, despite great potential grapes on land, such as "La Mancha" was made only for raw material grapes once suspected.
If quality like no problem at local level if it is exported to overseas, as well as the latest brewing technology incorporated, you must raise the quality.
So will be making good use of power of the United Kingdom has a network in each country, with of-the-art knowledge of the industry.
La Mancha continental climate as is already suitable for grape cultivation. Wine made using high-quality traditionally made in this land of vines, pull firmly to the characteristics of the grape varieties incorporate the latest brewing technology, it is arrived J.

J arrived to make is which dates from 1850, wine producers, Bodegas Fernando Castro.

This Bodega is a traditional maker in Santa Cruz de Mudela (Santa Cruz de medal), working up making wine from grapes grown from generation to generation.

This area is already known from old times as a land steeped in the food culture of La Mancha, Don Quixote.

Longer daylight hours and also high altitude temperature differences due to natural and land well ripen grapes.
Is a harsh environment for many plants and animals / insects and diseases, leave nature in can plant vines.

Harvested grapes and wines of great quality, represent the characteristics of the breed firmly concentrated.

And to the child inherited from father from generation to generation in the family, we came to winemaking.

Amenities a progressively larger farms and developed, but our winemaking in response to demand from the passion and the market was.

To pollute the name of the ancestor has a long history, we emphasize quality than anything else.

It is later in my twenties made a brewing Lab (laboratory) on its own. This lab is responsible for overall at the brewery, wine management.

Is the whole brewing process, from the beginning through to the end, how perfection of wine is raised, to manage all processes in this way.

We are proud with this La Mancha land force.

I think you want to show as a cost-effective and quality common to all producers in the region, but also our world-class wine of La Mancha wine. 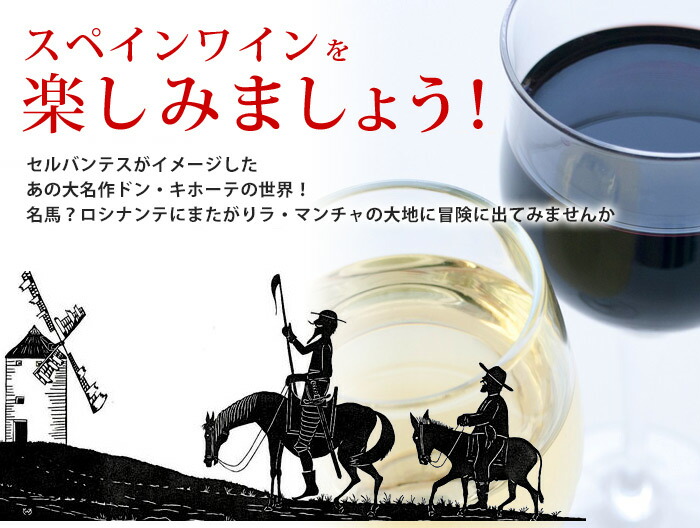 At first, speaking of everybody Spain, bullfighting, the flamenco, soccer will be imaged. It is the wine of the label with one, bullfighting (Toro) of such a Spanish passion culture as a motif.

Even if the bullfighting is called a valid symbol for a Spaniard, it is not exaggeration.

I call that a bullfighter (Matador) makes the last stroke in bullfighting for life and death with "a true moment", may all of the こそに Spaniard condense at the right moment? The passion that such Spaniards submit to bullfighting is great than we Japanese imagine it.

In late years it is extreme popularity in Japan! の Baru boom.
I may coordinate the affinity with ピンチョス (snacks) which is a classic menu of Baru, tapa (small dish dish) from a casual, modern image to a bar pro-fixture menu at preeminence widely.

I want to introduce delicious Spanish wine to people of much Japan!
It is a J seriously that found in such thought at last from various wineries over Spanish average.
The wine with the atmosphere that is loved locally, and be superior to winery, cost performance of popularity abroad, and is tasteful, and but is slightly friendly.
A hometown does not discriminate at all against us who are a foreigner when you visited the field and receives it warmly, and "come anytime!" And at first a bottle seems to appeal to a habitual drinker "to drink!" than reason.

It is the symbol of the abundant harvest, and the label which made a black ox reflecting the image of "bullfighting" of Spain (Toro) a motif again is novel, and red earth is endless, and the continuing very large earth expresses Spanish splendor.
The impressive design expressing a pulse of the earth of La Mancha where ability is recognized is attractive globally now.

A connection with France Bordeaux is the longest in the country く world with many consumptions of the wine, and company "アルケミーワインズ" making this wine is capital of the country U.K. laying emphasis on for education, the spread of wine most.
Though grapes with the potential are produced fantastically, in the land such as "La Mancha" where I have particularly ever grown only the grape for raw materials, most rely on the brewing technology only for a traditional method.
If it is a local brew level, you do not have any problem, but you adopt the latest brewing technologies and must put up quality if you make quality exported for foreign countries.
Therefore I have a network in each country and give life to power with the highest intellect of the industry of the U.K.
La Mancha that is already a good right lot of the grape cultivation as a continental climate. Wine, it which take in the latest brewing technology using a high grape of the quality arranged traditionally, and draw it to the characteristic of the grape kind well, and were made with this ground are this マジア J.

It is historical wine producer from 1850, ボデガス Fernando Castro to make マジア J.

This ボデガ is a place called Santa Cruz de Mudela (Santa cross デ ムデーラ) and is a traditional builder dealing with a wine structure from viticulture from generation to generation.

This area has been already known from the times when Don Quixote was written as "the land where a color is dark, and food culture of La Mancha, a delicious thing stay" from old days.

The field is 700m above sea level.

The land where the daylight hours are long, and nature and a grape become ripe well again because it is of high altitudes, and a difference of the heat and cold is big.
It is severe environment for many animals and plants, but there are few insect and blight and it is left to nature and can perform viticulture by just that much.

And the harvested grape becomes the wine of the splendid quality with a feeling of condensation that expressed the characteristic of the kind well.

It was a thing that we were only made with wine, and it answered passion and the demand from a market that I gradually made a field big, and I prepared facilities, and developed.

There is a long history, and do not dirty the ancestral name; we make much of quality above all to collect it.